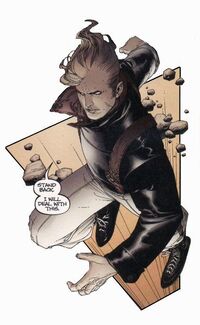 Thousands of years ago, a war raged between the alien races the Kherubim (also known as Kherans) and the Daemonites. One battle took two ships to Earth's Solar system. Both ships crashed on Earth, but the surviving Kherans and Daemonites continued their battle, inspiring humanity to various tales of gods, angels, demons and monsters. One of the high-ranking Kherans was lord Yohn Kohl, a hero whose likeness was used in the production of the Spartan Guards.

Over the millennia, Kherans and Daemonite moved their war away from the public eye and went underground. Many of the Kherans and Daemonites mated with humans and produced hybrid offspring. In the 1930s, Yohn Kohl called himself John Colt and became a renowned adventurer and hero. He was asked to join Team One, a group of superheroes and gifted military men. Yohn Kohl started to feel a corruption within himself and asked his friend, Lord Majestros to kill him before this corruption could take him over. Majestros obliged, but not before Lord Emp transferred Colt's personality to a prototype Spartan. Colt's body was left for dead, but regenerated.

Spartan was an android constructed by Lord Emp, using technology from the rogue island of Gamorra. Yohn Kohl's memories were locked away and Emp worked on perfecting the android.

When Emp assembled the Covert Action Team, also known as WildC.A.T.s, in the 90s to fight the Daemonites, Spartan was chosen to lead them. At first, he seemed to be devoid of any emotion, but over time, he started to develop feelings for his teammate Voodoo. During a mission to stop the Daemonite Lords from reactivating their old spaceship, the Kheran spaceship was found instead. The ship was about to explode though, so the WildC.A.T.s boarded the ship to fly it out of the Earth's atmosphere. The ship exploded and the WildC.A.T.s were presumed dead except for Spartan, whose body had been severely damaged before. Stormwatch, the U.N. superhuman team, repaired Spartan and he joined the team for a short while, but sacrificed himself in a mission.

Meanwhile, the WildC.A.T.s hadn't died, but in fact activated the ship's hyperdrive that took them back to Khera. On Khera, they discovered that the war had ended millennia ago and that the Kherubim had won. Emp had taken Spartan's backup disc along and installed it in a Spartan Guard on Khera. This body was far more advanced due to the superior Kheran technology. Spartan was appointed as Emp's bodyguard, but used his free time to check on his friends. He discovered a plot to assassinate Zealot, but was damaged before he could reveal it. The other WildC.A.T.s found his body and repaired him. Together, they managed to foil the assassination, but recent events had shown them the dark underbelly of Kheran society including their treatment of the defeated Daemonites and they returned to Earth, disgusted with the Kherubim.

On Earth, the WildC.A.T.s followed their former member Grifter to the island of Gamorra, where Spartan met Kaizen Gamorra. Kaizen turned out to be the body of Yohn Kohl, who had regenerated, but had became completely corrupt. He had captured the real Kaizen Gamorra and taken his place. Kaizen's presence awoke Kohl's memories in Spartan and the two battled. Mister Majestic appeared and destroyed Kaizen, this time for good. Spartan then took the name John Colt again. Soon, this body was destroyed though and a Spartan backup guard reactivated, this time without the John Colt personality dominating.

Months later, the WildC.A.T.s would disband following the apparent death of their teammate Zealot. Emp decided to 'ascend', a Kheran ritual where one discards their mortal shell and becomes one with the universe. Before he could do so, he first had to take of unfinished business though. He upgraded Spartan's body, greatly increasing its strength and durability. Their plan was to stop Kenyan, a man Emp once had given immortality, but who turned out to be a psychopath. Grifter and the French arms merchant Noir joined the team which was unofficially referred to as the Wildcats. Emp had hoped that Kenyan would kill him as the released energy during an ascension would have killed Kenyan as well, but Kenyan committed suicide instead. Spartan then offered to kill Emp's body, so that his mind could ascend. Emp ascended, but Spartan's invulnerable body withstood the released energy. Back home, Spartan discovered that Emp had left him the Halo Corporation.

Realizing that the superhero lifestyle wasn't an efficient means to meet Emp's wishes for a better world, Spartan took the identity of Jack Marlowe and decided to use the Halo Corporation to improve the world. He also accepted that he and Voodoo were no longer meant for each other, and gave Maul, who loved her, his blessings.

Marlowe began to use Kherubim technology to produce high-tech equipment far beyond human technology. Grifter, Noir, and Void joined the Halo Corporation. Void, especially, turned out to be a great asset to Halo because her ability to teleport allowed her access to Otherspace, a realm of limitless energy. Noir discovered that the matter in Otherspace could be used to create batteries that would last forever. He attempted to kill Void and reprogrammed Ladytron, another former Wildcat, to do his bidding. Marlowe saved Void by merging with her, greatly increasing his own powers as well as gaining the ability to teleport. He easily defeated the reprogrammed Ladytron and transported Noir to Otherspace, where he would die without a protective suit.

Marlowe then used Noir's plans and began producing batteries that would last forever. This was just a first step in his plan to better the world and he soon bought other companies, including an accounting firm where an Edwin Dolby worked. Dolby, a highly intelligent man, was fascinated by Marlowe's plans for the future and soon became his right-hand man. Meanwhile, Grifter performed black ops missions for Marlowe, such as liberating child laborers.

The discovery that Halo batteries could fuel a car so that it would never need any other fuel resulted in the production of Halo Cars. These cars that didn't depend on gasoline shocked the world and many politicians and businessmen started to see Marlowe as a threat. An assassin was sent to Halo, but was easily defeated by Marlowe, who wasn't impressed by the threats.

After Grifter learned the whereabouts of Zealot, who had been captured and imprisoned by her former followers, he led a mission to rescue her. Although Marlowe said he could not help the effort due to fear of harming the integrity of his corporation, he did use his abilities to manipulate the battle from behind the scenes so Grifter would be successful.

In the series The Intimates, Jack Marlowe turned out to be one of the sponsors of the Seminary, a school for young superheroes.

In 2005, Mister Majestic visited a future where the world including Jack Marlowe had been taken over by Daemonites. This future turned out to be in 2006. Majestic defeated Marlowe and freed him from the Daemonite-possession. In return, Marlowe used the last of his Void-powers to send back Majestic and prevent this future from ever occurring.

In another future, Majestic would encounter Spartan at the end of the universe. Spartan, had been called many names, including Metavac, by then and through countless upgrades had become a godlike entity. He revealed to Majestic that at the exact heat death of the universe, the universe would become a superconductor for any thought. Spartan absorbed Majestic and the resulted entity had a thought at the end: "Let there be light", creating a new universe. This plotline is reminiscent of the Isaac Asimov story "The Last Question."

Another version of this future had a human time-traveler attempting to take over Spartan and create a new universe where he would rule. The British superhero team The Establishment tried to stop this. Three members of The Establishment, known as the Golden, revealed that Spartan had foreseen the time traveler's interference and sent a part of him back in time. This part, known as Metavac, gave the Golden their superhuman powers and tasked them with protecting him in the future. In the end, the Golden failed to protect Spartan, but criminal Charlie Arrows used his powers to connect to Metavac and have the "Let there be light"-thought, assuring the existence of a new universe.

After the WildStorm reboot, Spartan is revealed to still be master of the HALO Corporation, itself worth approximately $3 trillion, with his personal fortune estimated at $500 billion. Interestingly, he is referred to as Hadrian, rather than Jack Marlowe. So far, Spartan has admitted to being interested by the idea of adult superheroes, who work without the need for showy battles or obvious victories, and has also begun to change the world commercially, with HALO pioneering both the 3-d telephone, and the personal Spartan robot bodyguard.

Spartan was named after a series of bodyguard cyborgs used by Kherubim Lords on their homeworld of Khera.