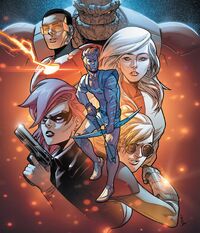 Youngblood currently consists of two of the original members, a few members who have rejoined the team and one new addition.

Note that many issues (especially #1s) were printed with multiple variant covers.

Retrieved from "https://imagecomics.fandom.com/wiki/Youngblood?oldid=66423"
Community content is available under CC-BY-SA unless otherwise noted.