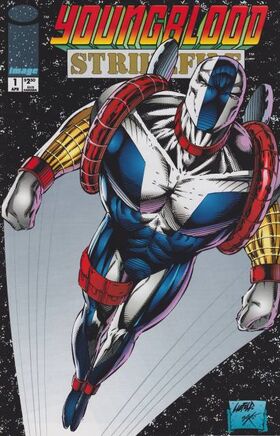 The former superheroine Glory recalls battling the Nazis alongside Diehard and SuperPatriot in the superhero team the Allies during World War II.  She then relates how SuperPatriot was recently abducted by the Cyberdata corporation and transformed into a cyborg.  She wants Diehard and Shaft to find SuperPatriot, restore his humanity, and punish Cyberdata.

In his personal log, Chapel describes a CIA mission six years ago in which he, Al Simmons, and an operative named Duke were sent to St. Louis to destroy a safehouse belonging to the terrorist group Cybernet.  Once they wiped out the group’s cybernetic War Dogs, Cybernet’s leader Giger taunted Chapel over a video link and set the facility to self-destruct.  Chapel killed Duke for betraying the CIA, and he and Simmons flee before the building exploded.  Three days later, they met with their supervisor Jason Wynn, but he refused to reveal what Duke did.  Five years later, Wynn tries to hire Chapel for a job, but Chapel refuses.  In retaliation, Wynn contacts Giger.