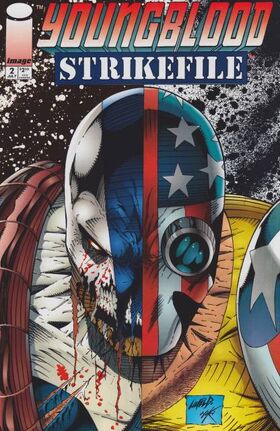 Diehard infiltrates a Cyberdata facility in Philadelphia to rescue SuperPatriot.  He fights his way through the corporation’s S.H.O.C. troops until he is attacked by SuperPatriot himself.  Diehard tries to talk to him as they fight, but SuperPatriot remains silent.  Diehard tackles him but gets tossed off.  Diehard gets to his feet only to see SuperPatriot about to crush him with a block of debris.

War Dogs blast into Chapel’s apartment while he is having sex.  They kill the woman he is with, and he retaliates by shooting them all. Through one of the Dogs’ severed heads, Giger tells Chapel this attack was just to get his attention and invites him to meet.  They do so the next night, and Giger reveals that Jason Wynn hired him to kill Chapel. Giger then tries to hire Chapel to kill Wynn, but Chapel responds by shooting him.  This Giger, however, was just an android decoy.  Speaking through it, the real Giger tells Chapel to watch his back.