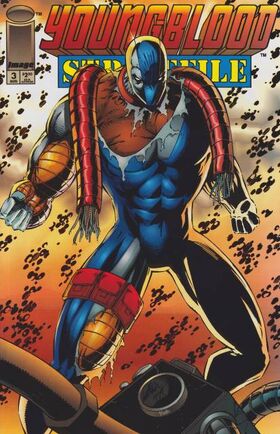 Diehard uses his shield to get the upper hand against SuperPatriot and knocks the cyborg out. Diehard takes him to a Youngblood facility for recovery and restoration.  Afterward, Glory thanks Diehard for his help.

While he worked for the CIA, Chapel received regular injections that seemed to optimize his physique.  Believing Wynn would never let him be harmed, he never questioned what was in the injections. In the present, Chapel breaks into Wynn’s mansion to kill him.  Wynn stops him by revealing that the injections were a genetically engineered strain of HIV.  Operatives were given the virus as a contingency; in the event an infected operative went rogue, the virus would be activated, eventually killing them.  In addition, Wynn has had Chapel fired from Youngblood due to the infection.  Wynn then offers Chapel a cure in exchange for working for him again.