Part of the Extreme Sacrifice 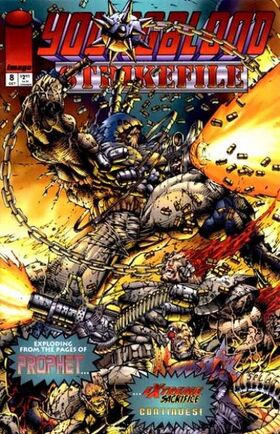 Hours after Prophet’s escape from the Ragnarok project, Crypt raids their Colorado base, killing every guard he encounters.  After stealing the project’s computer files on Prophet, he eagerly plots against Prophet and escapes through a teleportation portal.

In 1983, Dutch is in on a mission in Nicaragua to take out a Sandinista base. In the process, he is also testing out a cybernetic suit being monitored by the mission controllers.  After he kills a sniper against orders, the controllers deem him a loose cannon and activate an override.  Dutch finds the base deserted except for a large, stone creature that attacks him.  Impervious to his weapons, it beats the crap out of him and tosses him over a cliff. The controllers use the override to take remote control of his suit as the creature attacks again. It tears Dutch’s arm off, but the suit automatically cauterizes the wound.  Dutch goes into shock, and the controllers end the mission, sending in a helicopter to pick him up.  They also shut down the creature, called Aztech—the entire mission was a setup to test its performance as well as that of Dutch’s suit.  The controllers puzzle over why the military was willing to sacrifice Dutch for this test.  In an internal memo, the Covenant of the Sword explains it has infiltrated the U.S. government and used this incident to remove Dutch as a potential threat to their plans.

People gather outside the Schoenbrun Center high-rise where terrorists have taken several corporate executives hostage.  A reporter announces that Youngblood is sending an operative, and people speculate as to who it will be.  They are stunned when Shaft arrives since he has no superhuman abilities.  He infiltrates the building, single-handedly takes down the terrorists, and frees the hostages.  While the reporter marvels at Shaft’s performance, one bystander chastises another for saying he just got lucky.