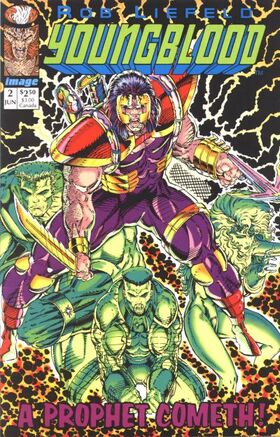 A team who call themselves the Berzerkers are trying to rescue a man named Kirby from an army of robotic beings controlled by a mastermind named Darkthornn. They beat the guards and free him. They run off to save the day. Meanwhile, Darkthornn is watching them, vowing that "the prophecy will not come to pass".

In Berlin, Youngblood have been called in to bring something back to the United States. A cryogenically-frozen man by the name of Prophet. The scientists who found him tell the story: Dr. Garnet Wells, the "mad" scientist, was working on human experimentation in 1937, using homeless people as test subjects. It was also rumored that he was using superhuman technology. One subject, Jonathan Taylor Prophet, developed superhuman strength, speed and stamina as a result. Wells gave Prophet an "outlandish" uniform and weapons, but disappeared sometime in the Second World War. Now, Youngblood must take Prophet back to the States for further research.

Cougar objects that this man's work will be exploited, but Combat tells him it is their job. Cougar notices a timer on the cryogenic tube, but just as he begins to investigate, the tube opens, unleashing a wave of energy and freeing Prophet. Prophet mistakes Youngblood for the Disciples of Doom, and a fight begins. Prophet disables Cougar and Combat, but Bramha breaks his neck. However, just as they are ready to bring him home, the Disciples of Doom themselves arrive for Prophet... mere seconds ahead of the Berzerkers, led by Kirby!

An angry vigilante in a dark costume tells us how he has had enough and has decided to fight criminals. We see him beat up a gang of crooks and break their spines. the vigilante leaves, as the narration proclaims "You are ShadowHawk, And you are taking back the night."

Retrieved from "https://imagecomics.fandom.com/wiki/Youngblood_Vol_1_2?oldid=73748"
Community content is available under CC-BY-SA unless otherwise noted.