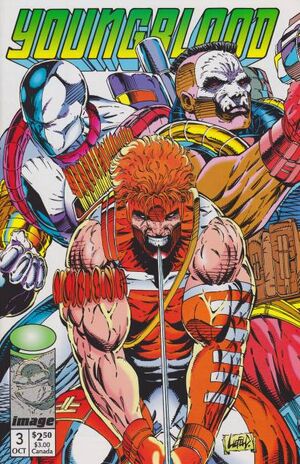 Prophet continues to battle the never-ending onslaught of Disciples, though his Body Banks are continually depleted. Both the Youngblood away team and the Berzerkers are down, and Prophet feels that he knows the one called Kirby.

Meanwhile, a Katellan spaceship is scanning the Earth for any signs of the renegade Combat. An Accuran ambassador insists that Lt. Khm'bt is the traitor they're looking for, although the Katellan Admiral Kh'rk has his doubts.

In D.C., Shaft and Badrock are just finishing a press conference when they are alerted to a jailbreak at the Pentagon. Shaft, Badrock, and Chapel arrive to find The Four making their escape. The Four try to teleport away, but Chapel is able to shoot Gage clear of the beam. Just as Shaft starts to interrogate Gage, Diehard appears with the news that a distress signal has been received from Berlin, and the team is needed immediately.

A man named Mr. Gate is talking to his assistant Smithers about the new HeavyMettle team. He is concerned that each of the members may prove hard to control and that a strong leader is what the team still needs. Smithers comments that there may not be a man on Earth who is up to the task, as Supreme is seen streaking through space.

Retrieved from "https://imagecomics.fandom.com/wiki/Youngblood_Vol_1_3?oldid=69530"
Community content is available under CC-BY-SA unless otherwise noted.