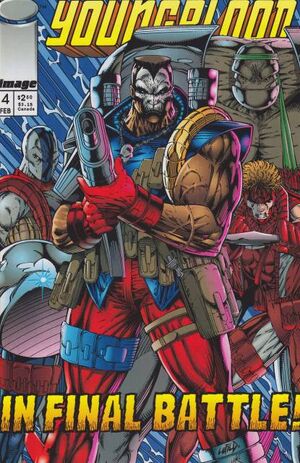 Appearing in "In Final Battle"

Plot Synopsis for "In Final Battle"

Youngblood arrives at the G.A.T.E. lab in Berlin, following the distress beacon of the away team, who have been out of contact. Diehard and Badrock enter the lab first, immediately encountering Disciple androids. While fighting they encounter Prophet, who joins them after recognizing them as teammates of his fallen comrades. When Shaft and Chapel appear, Prophet fills the team in on the Disciples and how they can only be stopped by closing the crash tunnels.

Diehard and Badrock are sent on ahead to investigate. Vogue shows up carrying a wounded Sentinel, who tells Shaft that the Disciples are here for Prophet. Diehard and Badrock enter the crash tunnels and encounter Darkthornn on the other side. Darkthornn knocks out Diehard and turns his gaze on Badrock. Back on Earth, the rest of Youngblood have gathered with the Berzerkers at the entrance to the crash tunnel, when out of it steps Darkthornn and a now hypnotized Badrock.

Pitt escapes his alien prison and arrives on Earth. Her materializes inside a New York Subway, where a gang of roughs are about to attack a young boy named Timmy and his grandpa. Pitt disposes of the gangsters, and tells Timmy not be afraid before running off into the night.

Retrieved from "https://imagecomics.fandom.com/wiki/Youngblood_Vol_1_4?oldid=59517"
Community content is available under CC-BY-SA unless otherwise noted.