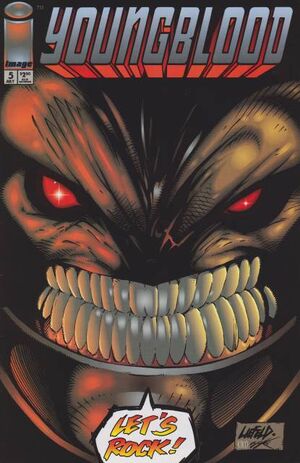 Darkthornn commands Youngblood to hand over Prophet to him, or else join Badrock in mindless service. Brahma are Grey are able to make short work of the hypnotized Badrock, but Darkthornn manages to both defeat Prophet and send a legion of winged demons after Youngblood.

Psi-Fire insists that he can defeat Darkthornn, but only if his psychic dampener is removed. Riptide and Vogue are leery of letting the deranged psychic off his leash, but with defeat imminent they see little choice.

Psi-Fire is successful in overpowering Darkthornn, who retreats back through the crash tunnel. The Berzerkers make to follow him, but Kirby decides to stay behind to help out Prophet. Diehard is spat back out of the crash tunnel just as it closes, confirming that Darkthornn's invasion has given up for now. Youngblood is ready to return home, and Kirby requests a ride for himself and Prophet.

Retrieved from "https://imagecomics.fandom.com/wiki/Youngblood_Vol_1_5?oldid=59518"
Community content is available under CC-BY-SA unless otherwise noted.