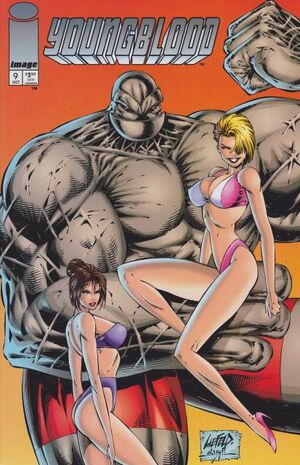 Badrock gets a letter from Hollywood to star in a TV series. He travels there and the executives explain to him that, since his life includes action, thrills and adventures but no sex, he works well as an example to young Americans, plus he has a lot of merchandising based on his persona. Badrock agrees to sign the contract, and then gets a tour through Hollywood, where he has a chance to show off his strenght in front of some beach girls.

Back at home, Badrock is sure that his series will be a success, but time passes and an impatient Badrock makes call after call to know why the show has been delayed. Finally, the premiere day comes, and Badrock invites every existing superhero to wach it, but it turns out to be a kids' cartoon where the animated Badrock gets pies on his face. The next day, Shaft and Knightsabre must clean after the Television that Badrock broke in frustration.

Retrieved from "https://imagecomics.fandom.com/wiki/Youngblood_Vol_1_9?oldid=61960"
Community content is available under CC-BY-SA unless otherwise noted.