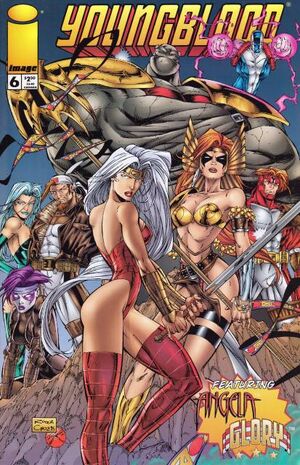 Appearing in "Rage of Angels, Part 2"

In the heat of their battle, Angela realizes she should have seen Celestine's plan coming. She explains to Glory that the Orbital Angel Station is a conduit between 5th heaven and Earth. They transfer Elemental Fire into mortal vessels creating warriors of light. She warns Glory they must head to Earth to cut off Celestine's next move. Glory hesitantly agrees and internally worries about what Angela know and isn't sharing.

Alan Keever sends Youngblood to check out the reports of a satellite that has gone missing but recently reappeared.

Shaft recalls how he woke up after making love to Vogue that morning. They both agreed that it's strange given they both had significant others.

Meanwhile, Badrock recalls running into a blind woman named Alex the other day. He asked her out after an awkward moment of her spilling coffee all over herself.

Knightsabre recalls upsetting Riptide the previous day. Did Hard helped console him even though he wasn't completely understanding him as a robot yet.

In the present, Youngblood suits up to enter the station. Shaft basis orders to the team.

Vogue had her memories triggered of the events leading up to hooking up with Jeff. She recalls being distraught over die hard and Jeff comforting her leading to their romantic engagement for one night. She behind resenting how men can only care about her for short time periods.

The Youngblood team is suddenly attacked by the Angels on the ship.

Retrieved from "https://imagecomics.fandom.com/wiki/Youngblood_Vol_2_6?oldid=47240"
Community content is available under CC-BY-SA unless otherwise noted.