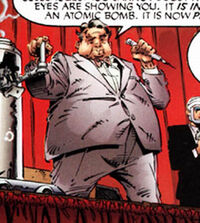 Yousef Volokhov is a Ukrainian scientist specializing in atomic theory.

He appeared in New York City to attend an Atomic Conference held at Columbia University. Unknown, the demons %^9 had planted thoughts in his head to detonate an Atomic Bomb in the middle of the conference to further the demons research on what could harm a Hellspawn.[1]

Andrei Zlenko attempts to smuggle several components necessary to trigger the atomic bomb but fails. The parts are damaged in transit from Ukraine. They find Porsche MacNeill, an electronics expert, to complete the build for them.

At the conference, Yousef demanded a fee of $1.5 billon to be paid to Ukraine for all the suffering that has occurred. Spawn and Harry Houdini crash the conference in stop Yousef from executing his plan. Yousef was then taken into custody.[2]

Retrieved from "https://imagecomics.fandom.com/wiki/Yousef_Volokhov?oldid=28336"
Community content is available under CC-BY-SA unless otherwise noted.