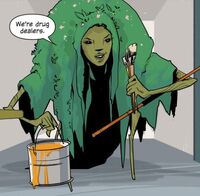 Yuma is the Second wife of D. Oswald Heist, and the set designer for Open Circuit.

Yuma is responsible for helping Alana get a job on Open Circuit, and also helps Alana keep her job after she pushes some boundaries while on set.[1]

Yuma reveals to Alana that the reason she (and many of their colleagues) is able to tolerate working on the Circuit is the fact that she does drugs (specifically Fadeaway). Alana expresses feelings of stress, and convinces Yuma to give her Fadeaway,[2] eventually causing Alana to become addicted to the drug.

Later on in the story, Dengo goes on a rampage at Open Circuit, and requests an opportunity to broadcast a message. Yuma tries to convince Dengo that his story will fall on deaf ears, and that talking about sex is the best way to grab an audience's attention. Yuma tries to convince Dengo that the story of a man from Wreath, and a woman from Landfall having a child is the story he needs to tell to get an audience to listen. Yuma also reveals the names, and location of Alana's family. Dengo remains unconvinced, and shoots Yuma.[3]

Yuma survives the gunshot, and finds Marko left behind after the Wooden Treehouse has left with his family inside. Marko accuses Yuma of selling drugs to Alana, and Yuma expresses regret for selling Marko, and his family out. In this moment Prince Robot IV appears.[4] Yuma later finds Ghus, and she, Marko, and Prince Robot IV enlist his help to find Marko's family.[5]

Yuma, Marko, Prince Robot IV, and Ghus leave on Prince Robot IV's ship, and on their journey, Yuma and Marko talk about what led Alana to start taking Fadeaway. In an attempt to understand what Alana was feeling, Marko takes Fadeaway, and Yuma joins him. The Fadeaway is revealed to have been tainted, and nearly kills both Yuma and Marko.[6]

After recovering from the Fadeaway, Yuma apologizes to Marko for giving him tainted drugs. Yuma later expresses embarrassment, and feelings of uselessness to Ghus, especially for selling out Marko, and his family, and for routinely being high on drugs.

The ship later falls under attack. It is revealed there is a fuel leak, and Yuma, and Ghus leave to fix it. Ghus states that the fuel chamber is so hot, anyone who enters will die. Ghus assumes the task of entering the fuel chamber, but Yuma knocks him out with a fire extinguisher. Yuma steps inside to repair the leak, and sacrifices herself while she's high on Fadeaway.[7]

Retrieved from "https://imagecomics.fandom.com/wiki/Yuma_(Saga)?oldid=60211"
Community content is available under CC-BY-SA unless otherwise noted.