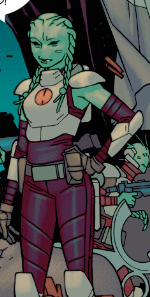 Zall Zaxal was a Thraxan born to unnamed Zaxal parents and has a twin brother named Zull.

Amanda visited the Zaxal royal family after she found out Rex was forcing them to work in the mines. The duo were able to rally enough troops to overthrow him. Rex was surprised to find out that Amanda had betrayed him. Zall comforted Amanda and they had an intimate moment while she was in monster form.

Amanda betrayed the Zaxal twins after they find out they were planning to invade another dimension. The duo went into hiding, with Zall, being pregnant with Amanda's child. After giving birth to Monax, she was killed by Rex's regime, attempting to erase the Zaxal bloodline from existence.

Retrieved from "https://imagecomics.fandom.com/wiki/Zall_Zaxal?oldid=64211"
Community content is available under CC-BY-SA unless otherwise noted.