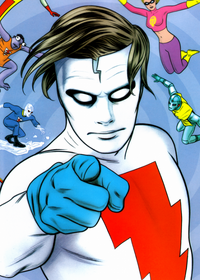 Madman AKA Frank Einstein and born as Zane Townsend, is a costumed hero and lab assistant from Snap City.

The following events were published by someone other than Image Comics but are still considered Canon.

As Zane Townsend, he was an agent of The Tri-Eye Agency that was killed in a car accident and brought back from the dead by Dr. Egon Boiffard and Dr. Gillespie Flem. The resurrected Townsend had no memories of his past life, so the Doctors named him Frank Einstein after their heroes, Frank Sinatra and Albert Einstein.