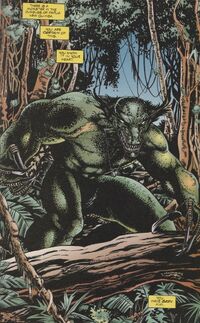 Zarej, codenamed first as Pagan and later Fiend, is the name of a superhero who served as part of the United Nations super-powered team called StormWatch. Zarej was born in New Guinea, to a United States Army Colonel and a native New Guinea woman. For many years before his birth, Zarej's father had been assigned to conduct chemical experiments in the beautiful New Guinean country. During that time, the Colonel fell in love with a native woman, despite the aggressive disapproval of the woman's father who cursed the Colonel. During the short-lived romance, the Colonel and his wife left the village people behind to share a new life together. However, when Zarej was born, he was allegedly "cursed" to be a mutated child. More likely, the deformity was a result of the chemical tests the Colonel had previously conducted during all the long previous years before. Whether curse or mutation, Zarej's father abandoned him and his mother. Leaving his dog tags, the Colonel's wife inscribed on the tags what had been first used to refer to the child "Pagan", following what her husband had called him. It is not entirely clear in the back story or initial cannon of Pagan, when and how he acquired his "normal" name of Zarej.

After being pursued and captured by a Skywatch tactical team, Zarej was promptly transferred to the North Atlantic StormWatch Training Facility where he and recruit Undertow underwent their training to become StormWatch operatives. Codenamed first as Pagan, he and Undertow later were picked up by StormWatch Prime to report to Skywatch for immediate duty service. Both Pagan and Undertow were not seen in action during the street fight between StormWatch and the WildC.A.T.s[1], or during the Wildstorm story arc. They were featured after the Wildstorm event as StormWatch dealt with its newest threat in the form of Despot, the leader of the Warguard who was released during the Wildstorm crisis[2]. After Issue 21, Zarej would appear in four more issues within the Warguard crisis story[3][4] before falling alongside his teammates during the ensuing battle that took place after the monumental crashing of Skywatch on Earth, in a brave attempt to subdue Despot and his Warguard[5].

Retrieved from "https://imagecomics.fandom.com/wiki/Zarej?oldid=65347"
Community content is available under CC-BY-SA unless otherwise noted.