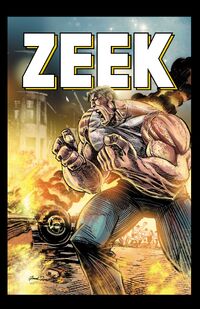 No one stronger than Zeek.

Zeek is the son of Atlas, the god of strength. Originally Zeek was recruited by a group of criminals who took advantage of his docile nature, this led him to clash with Dragon but with the help of the latter he realized that he had been deceived and therefore decided to abandon his criminal career.

Some time later, Zeek was recruited into the Special Operations Strikeforce in which he remained for a few years.

More recently Zeek moved to the Hidden City of God Town after meeting his father but when the gods decided to cancel their vow of non-interference with mortals Zeek resumed visiting the mortal world.

Retrieved from "https://imagecomics.fandom.com/wiki/Zeek?oldid=66855"
Community content is available under CC-BY-SA unless otherwise noted.