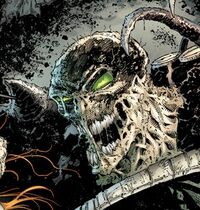 Zombie Spawn landed on Earth via an Asteroid. His worms sunk into the ground and when they emerged the dead walked the earth again. He had a heirarchy of zombie followers that collected fresh meat for consuming. When he stole Suzette, Ryan Hatchett's girlfriend, he became the target of an enraged boyfriend. Slowly turning into a zombie, Hatchett donned the name, 'Hatchet' and fought through Zombie Spawn's army until he axed him in the head, freeing his girlfriend.[1]